I went to the new Gino's in Towson. When I got there, there was a line, like all the other days they've been open. Though the other day we went and even though there wasn't a line, the girl outside said it was a 1 hour and 15 minute wait. My dad told me there wasn't a line because they kept it inside. When we got in, there was a huge TV showing fact's about Gino's history and people standing in line at the cash registers.When I saw the menu, there was no kids menu, though there were kid friendly things like a bacon cheeseburger and a cheeseburger. There was also other things like My Favorite Single Burger, My Favorite Double Burger, and Ameche's Power House. I had a Bacon Cheeseburger JR. because a regular is 2 burger's  instead of one. And they even had Chicken like Chicken tenders( what my brother got) and salads like Cob. We also got some French Fries and Onion rings with our meal. We found a table outside, since it was so crowded inside. It took a long time, though when it came, it was worth the wait. When the server brought our food and saw kids she said "Oh they were KIDS meals" but another server said "We are out of kids meals" and a third person said "we don 't have kids meals".  They seemed to be a little confused. But now let's go back to the food. The bacon cheeseburger tasted juicy, gooey, and meaty. What I call a fantastic bacon cheeseburger ( probably because I love bacon!)! And with a little vinegar, the french fries tasted delicious! My parents said the onion rings were greasy and looked like they weren't breaded(though I didn't try them). I give *** stars for kid friendly and **** stars for food. Also, there's one more thing I would like to tell you. Even though there sign says they have 1,000 flavors of milk shakes, this Gino's only has four. I found this out by my dad coming in and the person saying they only had four because they had just opened. Well, that's all. Bye! 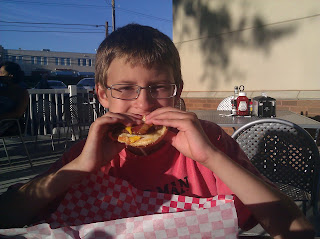 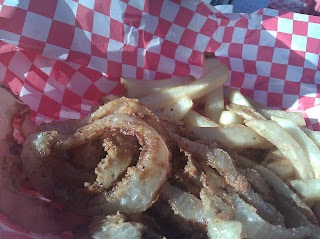 Here is my last review for the summer for Cool Progeny of Yogi Castle. 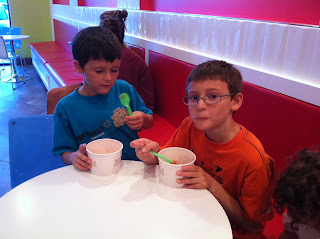 Click here
Posted by Eli at 6:40 PM No comments:

I went to a place in Baltimore called Miguel's for my 1st anniversary post. It was kind of a hidden restaurant because it was at the side of a hotel. When I got in, I saw skeleton's everywhere! I also saw that there was a bar and a jar of fire balls. My mom told me those were for after you ate. And I even saw the Best of Baltimore magazine which I was in. And guess what. They were in it too! When I got seated, I realized that some signs were in Spanish. I looked at the menu and realized that the menu was in Spanish too! The only things that I could read were empanadas and quesadillas! There was no kids menu either. I got a carne asada (steak) empanada and a cheese and chicken quesadilla to share with my brother. While I was waiting, they served chips that were crunchy, which had a spicy salsa which my brother liked. We ordered calamari which was chewy and it came with a creamy sauce instead of a tomato sauce. When it came, there was a squiggle of sour cream on the plate of the quesadilla. It was delicious! The empanada was spicy, meaty, and juicy. The quesadilla was gooey and juicy. I give ***** stars for food and *** stars for kid friendliness. I WAS going to give 2 stars for kid friendly, because of the skeletons. Then I learned that skeletons were a happy decoration during Día de los Muertos in Mexico. The skeletons weren't really that scary anyway. Well, that's all. Bye! 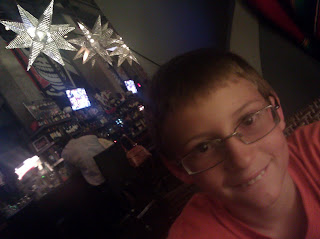 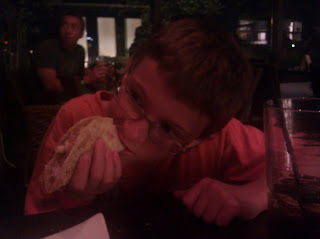 Adventures of a Koodie: Please Vote for Me!

My mom told me that Adventures of a Koodie is a finalist for Baltimore's Most Valuable Blogger by WJZ13 under Dining Entertainment. Please vote! 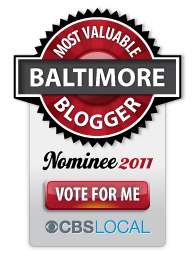 Click here
Posted by Eli at 9:48 AM No comments:

Here is my review of Snoasis for Cool Progeny. 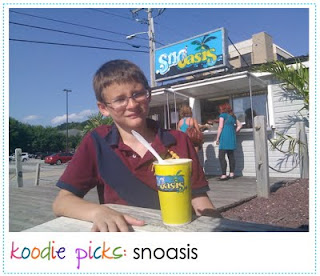 Click here
Posted by Eli at 8:30 AM No comments:

I wrote a guest restaurant review for the Macaroni Kid website and I wrote about my trip to Sofi's Crepes. Here it is and you can even win a $25 gift card:

Win a $25 Gift Card for Your Own Savory or Sweet Experience!

Click here
Posted by Eli at 9:44 AM No comments: 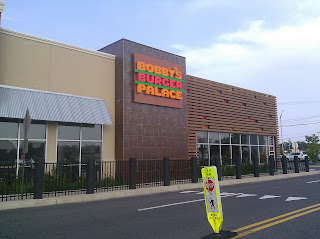 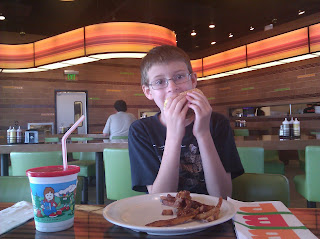 On Thursday I went to a place called The Mason Dixon in Shrewsbury, Pennsylvania. I have been there before with my Grandma and Pappap but I haven't reviewed it until now. When I got there, I saw a lot of old-fashioned signs in the waiting area. They had funny sayings on them.  A person showed us to our seats and gave us menus. There are placemats that if you are a kid and have a pen or pencil, you can draw on the back of it. They also offer crayons.
Now I'll talk about the kids menu. They have about 10-12 things on the kid menu like spaghetti and meatballs, fish sticks, and hotdogs. I had macaroni and cheese with mashed potatoes and beef gravy. When I got my food, I first tried my macaroni and cheese, which was layered in cheese. It tasted delicious! The potatoes with gravy wasn't what I expected, but it was better without gravy. Now back to the macaroni and cheese. It was very cheesy, and the side platter also came with an orange slice.
There is one more thing I forgot to talk about. At the cash register, there were candies which you could buy after your meal.
I give **** stars for food and ***** stars for kid friendly.
Well, that's all. Bye! 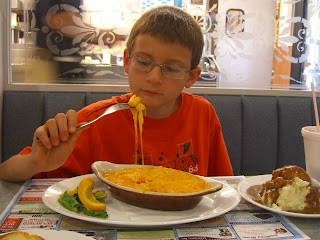 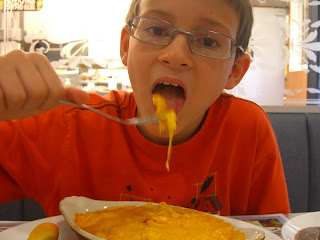 Here is my review of Bonkeys for Cool Progeny. 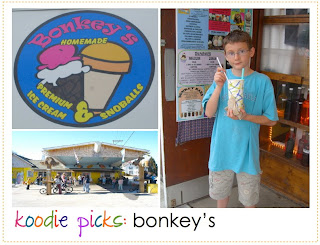