I went to a place called S&J Crab Ranch in Towson,MD. When I got there, a waitress immediately seated us and left so we could look at the menu. They had lots of items on it, such as the Crab Ranch Burger, Baby Back Ribs, and Free Range Chicken. They also had kids meal items such as Fried Shrimp, Grilled Cheese, and Mac n' Cheese.

Since they had ribs and this was such a grown up restaurant, I decided not to get a item on the kids menu. Instead, I got a half rack of Baby Back Ribs. My dad also chose my sides which was sweet potato fries and macaroni and cheese. They also had other sides like Salad, Garlic Mashed Potatoes, and Coleslaw. We also got an appetizer, which was Onion Rings. They were pretty good. They were crunchy, and were the best onion rings I've ever had. It was a very short while before our food came, and when I saw the ribs, I couldn't wait to try it. The ribs were awesome! They were messy, juicy, and had BBQ sauce on it(because I asked for it). They also fell off easily, though they didn't have much meat between the bones. The sweet potato fries were also very good. They were both salty and sweet. I didn't try the mac n' cheese because I gave it to my sister, Olivia. 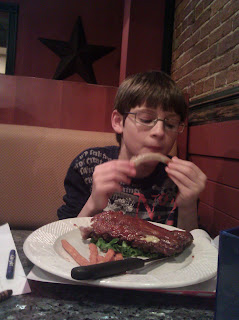