I went to S'ghetti Eddie's because I was being interviewed and they wanted to get my picture at a restaurant. We tried to go to a place called Hightopps, but they said we couldn't take pictures there, so my mom came up with S'ghetti Eddie's.

When we got there, I saw that there was a pinball machine. We sat down and ordered are food. Other than spaghetti, they have pizza such as Colors of Italy, Chicken Parmesan, and Meateater, hoagies (hoagies are subs), hamburgers and beef hot dogs. The kids meal wasn't on the kids menu. Instead, it was on something called Just a nibble, which has other foods on it like mozzarella sticks with marinara sauce and soup of the day. That is a bad thing because people would get confused and think there isn't a kids menu. And they only had three choices on the kids menu! I had a kids spaghetti and meatball. We also ordered mozzarella sticks.

While I was deciding, my dad and brother were testing the pinball machines. And guess what. They didn't work! But just then the food came out. My food was huge! The spaghetti even came with garlic bread. The spaghetti was delicious, there was lots of tomato sauce, and the meatball was juicy. Though it was too juicy, so it was too soft and it fell apart. There was so much of it, I decided to pack it up so I could save room for dessert.

I had a cannoli for dessert. They also have ice cream and snowballs. When I got the cannoli, I knew it was going to be good. There was a chocolate pattern on it and the plate, and chocolate chips were everywhere! It was better than it looked. It was creamy, crunchy, and chocolatey. I ate every bite with joy! 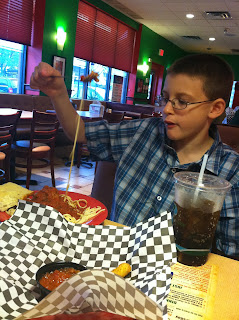