I went to a place called Freez King in Fredrick, MD. When I got there, I realized it was a very small restaurant, with only benches on the outside. And when I went in, the room space was really small.

On the menu was a Build-A-Burger, other burgers, and some yummy hotdogs. Some of the toppings were dill pickle chips, which were free, thick cut bacon, which was 99 cents, and aged cheddar, which was $1.19. They also had salads and sides. They also had sweets, which is soft serve and premium hand dipped ice cream, like The Split, F-Bombs, and The Brown Cow( a root beer float).

I got a hotdog with bacon and cheese sauce, and for dessert, a Black Cow(my brother had the same thing). We also ordered a side of french fries. It took a long time for our food to come, and when it got there the appearance wasn't pretty. It was delicious, but messy. My hotdog was juicy and cheesy, and the bacon was crunchy. The french fries were also good. They were crunchy and very salty. And the Black Cow, which was root bear, chocolate ice cream, and chocolate syrup, was fantastic! It was chocolatey and refreshed me. I give ***** stars for food and ** stars for kid friendly. The reason why I did only 2 stars for kid friendly was because there was no kids menu, they were slow, and you had to eat outside. I would definitely go here again because the food was really good. Well, that's all. Bye! 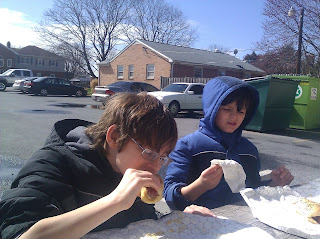