I went to a place called Mission BBQ for dinner. When I first looked outside, I saw they had a Mission BBQ Military Vehicle in the parking lot, which was AWESOME! Though when I got inside, it was a total different theme. Inside, it looked like the inside of a wild west saloon, only with TVs and a soda fountain.

When I looked at the menu, I saw they had a Brisket Sandwich, Spare Ribs, and Baby-B-Back Ribs. They also had Chicken, Sausage, and Turkey. The kids menu had Jr Ribs, a Slider, and a Kid Mac & Cheese. Sides were Green Beans & Bacon (I should have gotten that since I love bacon), Creamed Corn (which my mom got), and Fresh Cut Fries. I got the Jr Ribs, since I love ribs, with fries.

When I got to our table (I ordered first because you order your meal before you go sit), I could see the TVs clearly, but I also saw something else. They had a lot of different BBQ sauces, but the one I was interested in was the Mission BBQ Sauce, which I tried after I got my ribs. Speaking of waiting, it took a very short time for our food to come. When I got my ribs and put the BBQ sauce on, it tasted delicious! The ribs were juicy, and with the BBQ sauce, it was zesty and spicy as well! But the BBQ sauce was too powerful, and eliminated most of the flavor from the ribs. I give **** stars for food and **** 1/2 stars for kid friendly. The reason I give 4 1/2 stars instead of 5 stars is because it is more of an adult type of theme restaurant. Well, that's all. Bye! 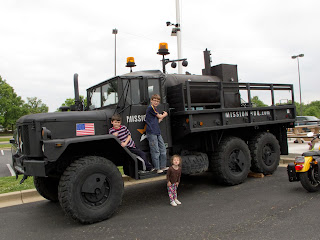