Another restaurant that I visited with my grandma was a place called Cheddar's. It's a chain restaurant that just opened in Pennsylvania. When I got there, the first 2 things I noticed about it was that they had a very big, unusual looking fan in one of the rooms, and that they had a big fish tank that was in the middle of 2 rooms.

It took a while for us to get seated, since they were so crowded. When I looked at the menu they had a lot of items, such as their Fish Taco, Shepard Pie, World Class Chicken Sandwich, Crispy Chicken Salad, and Pasta. They also had a kid's menu with a Grilled Cheese Sandwich, Grilled Chicken Breast w/ Veggies, and a Junior Burger.

I wanted to get the Grown-up Grilled Cheese, which had slow roasted beef and four slices of cheddar and American cheese with grilled bread. But, my mom ordered me the Monte Dogs from the kids menu, which was like a regular corn dog, only it had a special batter, served with fries. My brother had the Chicken Tenders from the kid's menu, and my grandma had the Tortilla Soup with a salad. My sister got a Grilled Cheese Sandwich with edamame, my dad got Chicken and Waffles, and my mom got Chicken Tenders.

As we waited, we had some Onion Rings, which were delicious! They were probably the best onion rings I've ever had! After that, though, there wasn't much to do. It took a long time to get our food, but that was only because they were very crowded. Though when our food came, the only one who didn't have something was my grandma. They forgot to bring her Tortilla Soup and her salad should have come earlier or at the same time as our food.

My Monte Dogs were really good. The batter was delicious, but the hot dog tasted like a hot dog you would normally get from packaged corn dogs. After I finished, my grandma and papap got me the chocolate cake to split with my brother, Owen, and my sister, Olivia. It was so big and it tasted fabulous! It was super chocolaty, and the cake kind of tasted like a hot lava cake.

I give **** stars for food and ** 1/2 stars for kid friendly. I would love to go there again, especially since my mom ordered the wrong thing. Well, that's all. Bye! 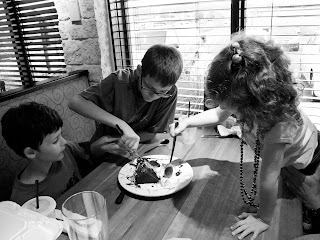