Sons of Sicily Pizzeria and Grill

I went to a place called Sons of Sicily Pizzeria and Grill in Pennsylvania with my Grandma and Papap. When I got there, I noticed that they had a Television with the Olympic try outs on. I also noticed that they had candy machines where you put in either 25 or 50 cents in and out comes either a piece of candy or a prize. On the menu they had items like their Fish Sub, Chef Salad, Italian Sub, and BBQ Chicken Pizza. They also had a kids menu, which has items like their Slice of Cheese Pizza, Fish Sandwich w/ French Fries, and Spaghetti w/ Meatballs.

My Papap and I both had a small Ham, Salami, Sauce, and Cheese Stromboli, while my Grandma, Owen, and Olivia had a Cheese Pizza. While we waited, we had Mozzarella Sticks as a appetizer. They were delicious! The cheese was really gooey and cheesy, and the batter around it went perfectly with the Mozzarella.

When I got my Stromboli, it was  HUGE, even though I ordered a small. The small Stromboli was 1ft long! The Stromboli was fantastic! The cheese was gooey, the ham and salami were really juicy, and the sauce that came with it fit perfectly with the it. I give ***** stars for kid friendly and ***** stars for food. Well, that's all. Bye! 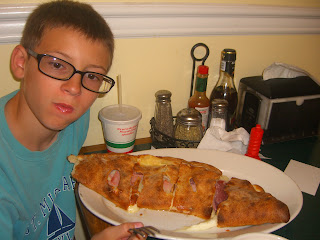