I went to a place called Rigoletto Italian Bakery & Cafe during my Virginia vacation. The reason why I went was because it was on Diners, Drive-ins, and Dives, and I wanted to try it out. When I got in, I saw pictures of Italy on the walls there. I also saw pictures of Guy Fieri. One more thing I found was their desserts in a glass case, and they looked delicious!

They had items on the menu like their Insalata Greca Salad, their Panini's like the Chicken Sophia Panini, and their homemade soups. They also had dinner specials and a kids menu, which had Kids Spaghetti, Tenders & Chips, Formaggio Panini, and Nutella Panini.

My brother and I decided to share what Guy Fieri had, their special Stuffed Meatballs W/ Spaghetti. As we were waiting for our dinner, we had some Calamari. It was fantastic! It was crunchy, and the sauce that came with it went great with the Calamari.

Shortly after that, our food came. The meatball was very juicy, cheesy, and meaty, and the spaghetti and tomato sauce went perfectly with each other.

Later, I looked at their desserts. They had things like a Romeo and Juliet Cake Roll, Pignoli Cookies, and Cannolis, and you could get chocolate dipped or with chocolate chip filing, or both. I had something called Michelangelo, which was a chocolate cake dipped in chocolate with a raspberry filling in the middle. It was delicious! It was super chocolaty, and the raspberry filling went great with the cake. 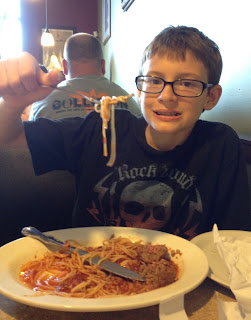