I went to a place called Mooyah during my adventure in Virginia, which reminded me of a Five Guys or Z'Burger. The place was pretty hidden, since they had their sign out in front of another restaurant, but eventually we found it. When I got in, I saw TV's, pictures of cows, and a humungous chalkboard inside.

To order, you had to fill out a piece of paper that they gave you by coloring in the circles next to the items that you wanted to order. Some of the items on the menu were a Mooyah Burger, Little Mooyah Burger, and French Fries. The kids menu consisted of a Little Mooburger, Hot Dog, Grilled Cheese, and Chicken Strips. They also had lots of shakes, like a Caramel Shake, a Mint Chocolate Chip Shake, a M&M's shake, and even a Butterfinger Shake!

I ordered a Little Mooyah Burger with American Cheese and Bacon, a Snicker's Shake and a side of some Mooyah Fries. While I waited, I watched TV. My shake came first and it tasted awesome! It had real Snicker's pieces in it, it was really creamy, and it was chocolaty! I also tried my brother's Mint Chocolate Chip, but they forgot the chocolate, so they had to take it back and remake it.

My Little Mooyah Burger was delicious! The bacon was crunchy, the cheese was cheesy, and the burger tasted juicy. The fries, though, were just okay. The weren't very salty like I like them, and they were pretty plain.

I give **** stars for kid friendly and ***1/2 stars for food. Before I left, I put "The Koodie Was Here" with a smiley faced person wearing glasses, and to finish it of, I wrote "MOOYAH!" below it. Also, I heard that they maybe opening up another Mooyah place up in Washington D.C, so all you folks in or near Washington D.C should go because I think it is delicious! Well, that's all. Bye, and Mooyah! 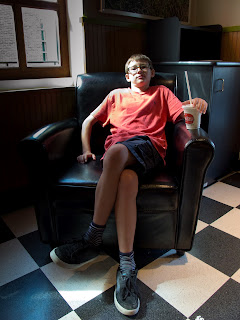