I went to the Rumor Mill restaurant in Ellicott City. What is really cool about the Rumor Mill is that the chef is Matthew Milani, who competed in the Grilled Cheese competition which I was judge at, and his grilled cheese was one of my favorites!

When I came in, it wasn't really crowded, since it was only 5:30 pm. I realized first that they had a upstairs dining room as well as a bar on the first floor.

When we got seated, I saw lots of maps and plaques of magazine articles on the wall. They also had oddly shaped glasses, which was really cool.

When I saw the menu, they had small plates like the Tomato Tower, Mushroom Tart, and Seared Tuna, and on their Shared plates part they had items like  Fries and Fusion Ketchup, Tuna Tartare, and Crab Dip. They also had some desserts like Chocolate Raspberry Flourless Cake, Bread Pudding with Ice Cream, and Amaretto White Chocolate Creme Brulee. But what I didn't see was the grilled cheese which they served at the contest and a kids menu. That was because their menu changes a lot, so some of these items may not be there when you go.

I ordered Ribs, which I shared with my dad and my brother, my mom and sister had a Potato & Spinach Salad, and everyone shared a platter of Brie with Peach Marmalade and Sweet Potato Fries.

While we waited, we talked with our waiter, drank our water, and read the plaques. The chef's wife came and talked to us and I think she remembered who I was from the Grilled Cheese competition. But when our food came, though, it was beyond amazing!

The fries had a cinnomany taste, which made it stand out, the ribs had BBQ sauce that made it pop out, and the Brie with Marmalade was the best brie I've ever had! We also ordered mini burgers and they were awesome! They were juicy, and they were cooked medium rare!

Before we had the dessert course, the chef came back from the wedding across the street and asked us if we wanted to sample some white chocolate mousse. It was very creamy and tasted just like white chocolate! I think they should put it on the menu.

For dessert, we got the Ice Cream Trio and Banana Wontons. They were delicious! The Banana Wontons also had chocolate on top, which made it even better! The ice creams for that day were basil, mint chocolate chip, and Butterfinger. We also got Chocolate Marshmallow as a bonus to try, and all of them were fantastic! The Basil was very savory, and the rest were very sweet, especially the Chocolate Marshmallow! But my favorite was mint chocolate chip, of course! And all of them had actual ingredients, like the basil had real basil and the mint chocolate chip had real mint in it!

I really hope I come there again, especially so I can try their other desserts. Well, that's all. Bye! 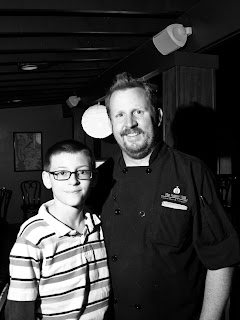