I was asked to come to Spoutwood  Farm's Teen Battle CHEFS, which is an eight session program that teaches teens and "tweens" how to cook, on the last day for the final "battle."

While I was waiting for the teams to finish their dishes, I helped get mint from the garden. The mint was for an experimental drink the leaders of the teams and Mrs. Liz, the sponsor, were making. I got to see that the farm had a lot of vegetation and wildlife, like sugar snap peas, tomatoes, butterflies, and wood wasps. And I also learned that all of the veggies and fruit that were in the farm's garden were used in the chef's meals.

Finally, the food was ready! The Cucumber and Peach Salad was sweet, but it was missing some pepper. The bruschetta was crunchy and tasted like pizza, but was a little bland. The spinach quesadillas were my favorite. They were served warm, and the goat cheese and spinach complemented each other greatly. The drink was supposed to be like a lemon-lime soda with mint. It was refreshing but I think they needed more fizz and less lemon-lime. I didn't think it was a good combination with the mint.

Overall, I give ***** stars for the food since the meals were made by teens and I think they did a good job. I didn't rate kid friendliness since it was made by teens.

I might actually try to attend the camp next year to make my own culinary creation! Well, that's all. Bye! 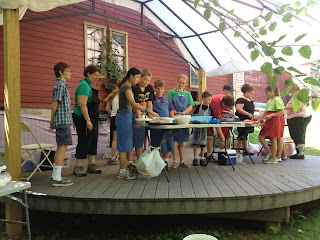 DESSERT AT THE FUDGERY

Last but not least, I went to a place called the Fudgery in North Carolina. When I came in, I saw they had posters of old advertisements, and each one had the owner of the Fudgery on it. They also had ice cream and caramel apples. The staff was really friendly.

There were different types of fudge like Cookies n' Cream, Rocky Road, Dark Chocolate Nut and Maple Fudge. There were also caramel apple flavors like Pecan, Oreo, and Chocolate chip. I tried a sample of a fudge called Extraordinary Chocolate. I thought it was amazing! It was creamy, smooth, and had a large chocolate and sugar flavor. It tasted like it was from heaven!

I also watched them make the fudge, which was really cool.

I give ***** stars for food. I'm not judging kid friendliness because I think fudge is kid friendly enough.

I would really want to come here when I don't have braces so I can have a caramel apple. Well, on to my ending!

Thank you for reading all of this (but if you didn't, then do it!). I hope that you have a great rest of the summer, dine at the right places, and continue to keep reading my posts. Well, that's all. Bye 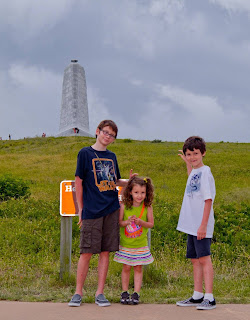 On our way home from North Carolina, we stopped at a place called Digger's Diner. This was on our list of places to go.

When we first drove in, I saw it wasn't just a diner. It had a farm, a gift shop, a monster truck tune-up shop, life size statues of Grave Digger, and even a part were you can ride on a monster truck!

We first went to the attractions, which were awesome, before dining at the diner. When I walked in to the diner, I saw that there were parts of Grave Digger on the ceiling (which scared my sister, Olivia), TVs, and even coloring books!

On the menu, there were items like Slap Wheelies for breakfast, which is basically 3 Pancakes with ham, bacon, or sausage. For lunch or dinner, they had Digger Dogs, which is 2 hot dogs with a choice of mustard, ketchup, onion, and relish, Legend, which is 2 stories of turkey, ham, bacon, with American Cheese served on toasted bread with lettuce, tomato, and mayo, Winner's circle cold plate, which are 3 salads of your choice, and a Cyclone, which is another name for a shake. There was also a kids menu, which had chicken fingers, grilled cheese, and macaroni and cheese. I had a kids grilled cheese since I wanted to try something from the kids menu.

While we waited, I watched Television while my sister drew in the coloring books and my dad chatted with the workers. I also observed the Grave Digger parts on the ceiling, since it took a while before our food came.

Finally, our food came! The grilled cheese was okay. It was warm and cheesy, but didn't have much flavor besides that.

I loved being able to ride on a monster truck and would love to come back here again. Well, on to our final post! 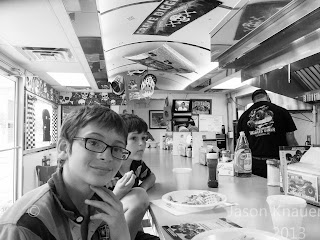 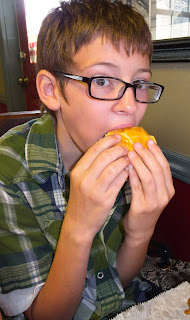 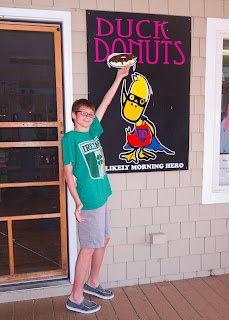