I went to a new place in New Freedom, PA, called the Rail Trail Cafe. I went there with my grandma, since it was new. It was also walking distance from her bike shop, so we decided to check it out.

The cafe is right next to the train museum, so after your visit, you could eat at the restaurant next door! Also, it's located near a bike trail, so you could ride up there instead of driving!

When I got in, there were two small rooms which you could eat in. There was also a cooler containing soda and other drinks.

My grandma, brother, sister and me split a Air Monkey, which is wheat wrap with peanut butter, preserves, apple slices, banana slices, and granola to split. My brother, Owen, also got oatmeal. While we waited, I read the comics part of a newspaper.

Our food, after a while, came. The Air Monkey was fantastic! The peanut butter was creamy, the apple slices were juicy, the preservatives stood out because of the grape flavor, and the bananas added a tropical flavor.

What they can do is put on a kids menu and put out a little more entertainment, but they shouldn't take out any previous food items. I would love to come back again for another Air Monkey. Well, that's all. Bye! 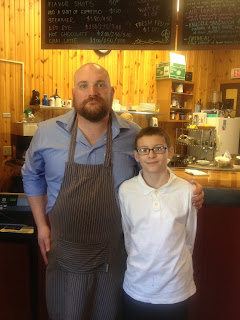 I went to a placed called Pita Pan. It was a pizza place near my house that my dad had been wanting to take my family to. I had also seen their delivery cars in my neighborhood, and I was curious about what it was.

Just a little history before I commence: the pita bread was originally from Greece. It is a very thin bread, so the crust on the pizza would be thin.

The restaurant wasn't a very big restaurant, but large enough for some families. It had a television and some nice decorations.

On the menu there were items like a Garden Wrap, a Chicken Pesto Panini, Crab Cakes, a Steak Sub, Spaghetti, and, of course, Pizza! They had Veggie Pizza, Hawaiian Pizza, and Greek Pizza. They also had a kids menu, which consisted of Chicken Nuggets, Chicken Tenders, Grilled Cheese, and Hamburgers.

We got a Large Pizza with Meatballs, while my mom got a salad and a wrap. While we waited, we talked about our day at school and work.

It took a while, but finally, our food came! My pizza was delicious! The crust was thin, the cheese was cheesy, and the meatballs were moist and juicy. I really liked how there were meatballs on the pizza, since I had never had them before.

I would love to go to this place again! Next time I'll try their Spaghetti from their kid's menu. Well, that's all. Bye!