I went to a place called Bullock's Country Family Restaurant in Westminster, near where my mom works. It's not only a restaurant, it sells meat and other farm products. And, on top of all that, it's kid friendly!

When I came in, I saw that there were 2 rooms, each where you could dine. Also, there was a salad bar which was shaped like a country wagon, and a model train system on the ceiling.

There were many things on the menu, such as Salad, Roast Beef, Chicken, Bacon Cheeseburgers, Cole Slaw, and Ice Cream. There wasn't a kids menu, though, but there were a lot of kid friendly items, like Hot Dogs, Macaroni and Cheese, and Grilled Cheese. I had a B.B.Q Sandwich, since my mom and dad disagreed on getting a Bacon Double Cheeseburger. I also had Mint Chocolate Chip ice cream after I was done.

While we waited, we talked with each other about our day, since the train wasn't on, the Television was off, and there wasn't anything else to do. It took a normal amount of time for our food to come, considering how big our order was and the amount of people there.

My sandwich was delicious! The beef was juicy, and there was a strong taste of B.B.Q in there, too. There was also fries. Also, my ice cream was cold and creamy!

What they could do better is to maybe add a kids menu and some more entertainment. Well, that's all. Bye! 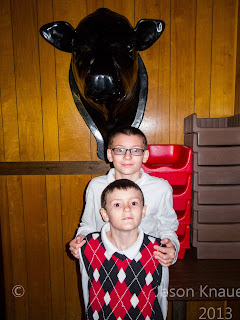