I went to a place called Yasou Greek Bistro in Cockeysville. When I came in, I realized that the 2 rooms that were in the restaurant were separated by the kitchen. It was also small, and not many seats.

On the menu, there were items like Spanakopita spinach pie, Taramosalata, which is a dip with fish and olive oil, lemon, and potatoes, Greek Salad, Gyro, and various Fresh Subs. There were not kids meals, but there were some kid friendly food items like a Hamburger, Chicken Tenders, Pizza, and Greek Fries.

We got a pizza(yum!), with Greek meatballs, even though they weren't on the menu as a topping. We also got a Melitzanosalata, an eggplant dip, as an appetizer, and Baklava, which has honey, nuts, and filo, for dessert.

While we waited, we talked about our day since there was no entertainment there.

Finally, our food came. The Melitzanosalata was delicious! It was really creamy, and had a garlic and lemon  punch. The pizza was amazing! The meatballs were tender, juicy, and had a pinch of cinnamon, the pizza was cheesy, and the crust was very thin. The Baklava was fantastic! It was sweet, light, and crunchy.

I would really like to come here again, though, for the desserts and pizza. I do recommend adding a kids meal and entertainment like a TV. I also recommend putting Greek meatballs on the toppings menu. Well, that's all. Bye! 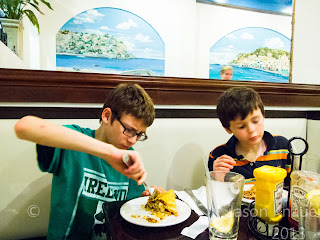 Updated: Bobby's Burger Palace and the Interview with A Food Blogger

One day, a kid food blogger named Henry e-mailed me and asked if he could interview me for a school project. I, of course, said yes. So we agreed to meet at the Bobby's Burger Palace at the Maryland Live Casino.

Although I had been to a Bobby's Burger Palace before, this one was different since you had to enter by the Casino. It was also very loud, which is good and bad. Finally, there was a lot of TVs.

The menu was like the other Bobby's Burger Palace with the Napa Valley Burger, the Crunchified Burger, and Grilled Cheese. They also had a kids menu, but the only thing on it was a Kid's Burger. You could get a Kid's Grilled Cheese if you asked.

This time, I got a Kid's Burger Crunchified, which means that there's potato chips on it. I got it medium-rare.

While we waited for our food, Henry interviewed me. To read it, go to Talk About The Food, Henry's blog.

Our food came pretty quick. It was delicious! The meat was tender and juicy, and the burger was crunchy. I give ***** stars for food and *** stars for kid friendliness.

I really want to come here again for milkshakes, which I bet are really good. Don't forget to read Henry's interview! Well, that's all. Bye! 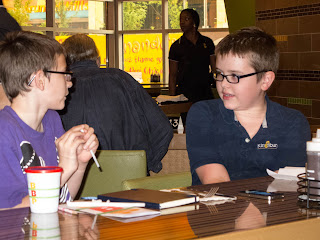