I went to a place called Hinkle's Pharmacy, which isn't only a pharmacy, it's also a restaurant. We went there because after visiting The Turkey Hill Experience because it was close by.

When I came in, I saw a old fashioned diner and a pharmacy mixed together. It had old fashioned stools, and booths! The pharmacy looked like a regular pharmacy, except it had a restaurant connected to it.

While we waited, I talked with my family and ate my soup, which came earlier than the rest of my meal. There wasn't much to do there, and it took a little while for our food to come.

My food was delicious! The soup was good, but wasn't very salty at all. My grilled cheese was cheesy, but wasn't much of anything else. My ice cream, though, was creamy, chocolaty, and smooth. This was because it came from the Turkey Hill factory, which wasn't very far away.

I give *** stars for food and *** 1/2 stars for kid friendly. The reason why I gave such a low rating for kid friendliness is because that there wasn't much stuff to do there. My advice would to add more stuff for kids to do there, like a coloring page or Television for entertainment.

I would like to come back so that I could try their breakfast, though. Well, that's all. Bye! 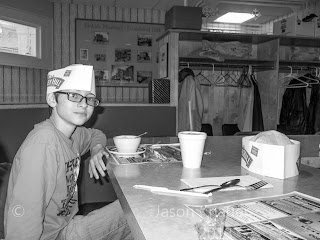