When I got my first look at the place, it looked pretty much the same when I drove past it before, but then I realized that there were lots of lights and music on the balcony (which, honestly, I've never noticed before). When I got in, I saw that it looked very fancy for a place with an outdoor bar. When we got seated, I saw they also had TVs in just about every part of the restaurant, but ours was turned off.

On the menu they had items like Fish of the Day, Shepard Pie, and McFaul's Crab Cake Sandwich. They also had a kids menu, which had items like Hot Dog, Fish and Chips, and a Burger. I got a Pork BBQ Sandwich, since I love them, my mom got Salmon BLT, and my dad got a Cheeseburger, since some of the rest of the items were expensive. While we waited for the food to come, I drew on the mat and the table, since you can draw on it, and got to see the balcony.

When our food came, I saw that my sandwich came with a side of coleslaw, but since I don't like coleslaw, I gave it to my mom instead. My Pork BBQ Sandwich tasted delicious! It was juicy, moist, and had lots of BBQ sauce on it, since it came on the side and I got to put it on. It also came with homemade potato chips, which were good. They were crunchy, and had Old Bay on them, but weren't very salty, like I like them. We were going to have their Black Bottom Cheesecake, but the waitress told us that the kitchen closed at 9:30!

I give McFaul's  *** 1/2 stars for food and *** 1/2 stars for kid friendliness. The reason I gave 3 1/2 stars for both is because the kids menu was very expensive and they didn't tell us that the kitchen closed or when it closed. I really wish I could have tried their Black Bottom Cheesecake. Well, that's all. Bye! 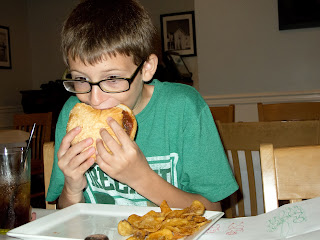