I went to a place called The Mallow Bar, a place where they make very big, sticky, and delicious Rice Crispy Treats.

When I got there, I saw that it was a very small restaurant, with about 4-5 tables. But even though the place was small, the flavors and varietys of Mallow Bar are huge! They have bars like a chocolate dipped bar, a Crunch Bar, which is a Rice Krispy Treat with M&M's and popcorn mixed in, and a Trail Bar, which has dried cranberries and toasted pumkin seeds in it. They also sold caramels and something called Softies, were they different have flavored marshmallows like Coffe and Vanila Bean. One more thing they sold was muffins and cupcakes, in lots of flavors, and they change everyday. And the best part was that all their marshmallows were home made!

I had a Caramello, which is a Rice Krispy Treat dipped in caramel, and a Cherry Cheesecake Softie. They were delicious! The Caramello was really sweet and caramelly, and the Softie tasted just like if you were biting in to a real cherry cheesecake! And, as I said earlier, both were really sticky and gooey! I also tried a bite of my brother's Mallow Bar, which was chocolate dipped. It was delicious! It was really chocolaty, and it was my favorite, dark chocolate!

I really hope I go again some day, mostly so I can try their muffins and cupcakes. Well, that's all. Bye! 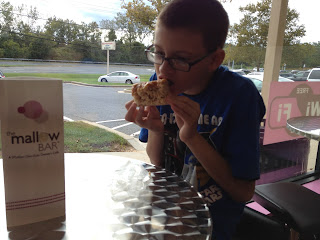