I went to a restaurant called the Hibachi Grill. It's an Asian themed buffet. The reason why I went here is because it was my Uncle's birthday, so we decided to take him along with my Aunts and Uncles to a buffet.

When I arrived, I saw 2 Chinese statues, which are really neat because they look really old and handcrafted. There are also fish swimming in an indoor fountain at the entrance. They also have glass paintings that show the beauty of Asia and a television at the entrance for those waiting to be seated!

Because it was a buffet, they didn't have a menu, but you can eat whatever is on the buffet. I didn't know some of the things they had, but I had also been there before, so I had a semi-clear idea of what they had.

There were sugar doughnuts and french fries, sushi and grapes, ham and pot stickers, and much more! I had 2 sugar doughnuts, corn, chicken with sweet and sour sauce, steamed broccoli, jello, white rice, grapes, and for dessert, mint chocolate chip ice cream and chocolate cake!

Everything was delicious! The sugar doughnuts were sweet and soft, the corn was sweet and juicy, the chicken in sweet & sour sauce was a mixture of sweet, sour, and juiciness, the broccoli was juicy and tasted just like my dad makes it, the jello was sweet and jiggly, the rice didn't taste like anything, though, but the mint chocolate chip ice cream was chocolaty, creamy, and minty, and the cake was moist and chocolaty. 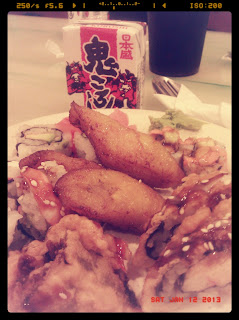 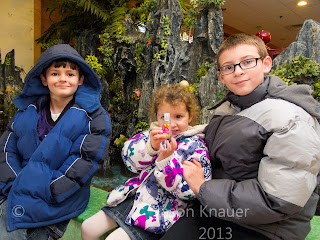