I went to a place called The Abby Burger Bistro. When I walked in, I saw that it was a bar and the first thing I smelled was beer. I then realized that at the back were four tables. And I saw wide screen TVs in front of every table.

When we sat down, the waitress poured all of us a glass of water, and then left. When I looked at the menu, I was pretty surprised. They had stuff like alligator bites and waffle fry nachos. They also had some meats which I've never tasted like ostrich, elk, bison, and kangaroo. They also had a kids meal with foods like mac'n'cheese and kids sliders, though I heard that there burgers where good,so I wanted to have one. Another problem was that there was only four choices on the kids menu! But there was also activity's like mazes and a treasure hunt on the menu.

If you don't order from the kids menu, you can always build-a-burger. You get a checklist and you check off the meat, cheeses and other things that you want. There were two meats of the month and they were duck and kangaroo. Since I never tried kangaroo before, I decided to have it. I also had gran queso (a type of cheese) and BBQ sauce.

When I got my burger, it had a olive on a stick and homemade chips. Since I don't like olives, I gave that to my mom. My first bite of the burger was delicious! The BBQ sauce had lots of flavor, though I couldn't taste the cheese and the kangaroo meat had a seafood type of taste. The chips were crunchy and salty which made them taste fantastic. I give food ***1/2 stars for food and **1/2 stars for kid friendly. Well, that's all. Bye! 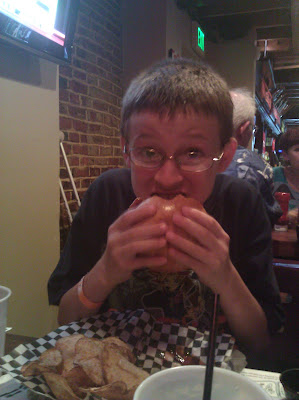 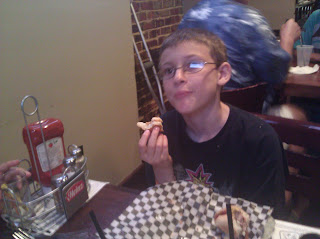