On Wednesday I went to a place Called the Haute Dog Carte, which is a hotdog cart that doesn't move.  When I got there, there was a short line at their little tent. There was a little choice, and there were only two hot dogs which would be kid friendly! They where HD signature and Chef Dogs! Though the hot dogs were huge, so it is a adult place.I was really interested in how they prepared the bun. First, they take out a hotdog roll. Next, they put it on this thing which splits them in half. Last, they take it of and comes out toasted! I got a chef dog, which was Smokey Mountain sausage. I got it with BBQ sauce and bacon marmalade. It was delicious!  There was also a lot of bun. It was so big I had to take half of it home! The marmalade made it much better. Though there wasn't a lot of BBQ sauce. The bun was very soft, and because of the marmalade I didn't taste much of the smoked sausage. I give *** stars for kid friendly and *** stars for food. Well, that's all.Bye! 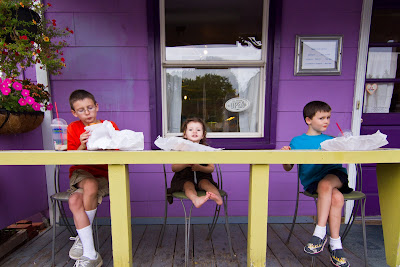