On Thursday after Vacation Bible School at church I went to the Towson farmers market with my dad, my brother, Owen, and my sister Olivia, to get some groceries. The farmers market has vegetables like carrots and candy apple onion, and fruits like blueberries and sweet cherries.

We also hadn't had lunch, so my dad suggested we go to the Empanada stand. They also have a restaurant version called Max's Empanadas.

While we where going there, we saw the stand which has a truck version of it. It was Dangerously Delicious! Though my dad said we would get the pies they had after lunch.

When we got to the stand, I saw Empanadas. An Empanada looked like a small pie with different types of fillings. They had Ham and cheese and chicken Empanadas. We all had the Chorizo Empanada, which is sausage, sun dried tomato, walnut, and mozzarella. Since there were no tables or chairs, we went inside a store, Ridgely and Ferrens Markeplace, where you can eat in. We also didn't have a drink, so we got a special type of root beer from the store called Dominion, which was sweetened with honey instead of sweetener, which is what most root beer is sweetened with. The root beer was great! It tasted a lot like Virgil's, which is another brand of root beer. The empanada was also delicious! It tasted a lot like pizza, my favorite food. I give ***** stars for food.

I'm not doing kid friendliness because the food didn't come from a restaurant. I have one more thing to say. By the time we got back to the Dangerously Delicious, they didn't have what we wanted! Well, that's all. Bye! 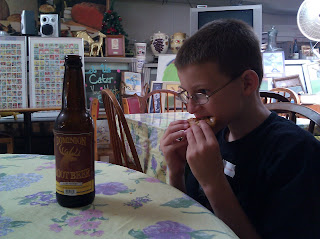